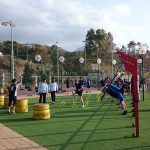 Spaniard golf star player, Sergio Garcia said yesteray after winning August Masters 2017: “I thought I had it on 18, but the putt didn’t break, but I knew I was playing well. I felt today the calmest I have ever felt on a major Sunday. Even after making a couple bogeys, I stayed calm and I still believed. … It’s been an amazing week and I’m going to enjoy this for the rest of my life.” He also had some special words for another Spanish golf player and Augusta winner, Seve Ballesteros. who passed several years ago.

Congratulation for the Major 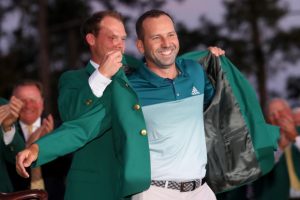 Danny Willett of England presents Sergio Garcia of Spain with the green jacket after Garcia won in a playoff during the final round of the 2017 Masters Tournament at Augusta National Golf Club on April 9, 2017 in Augusta, Georgia. (Photo by Andrew Redington/Getty Images)